Hover your mouse over highlighted words for useful definitions or links. 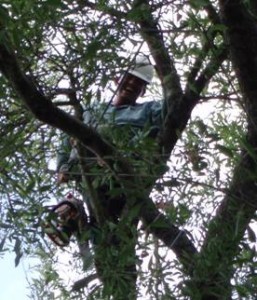 PRUNING, when properly performed, is beneficial and can reduce the risk of stem and branch failure; provide clearance for structures, vehicles, and pedestrians; improve health and appearance; and improve views.  Improper pruning techniques are harmful for a tree’s health, vigor, stability, and appearance.  A tree that is not pruned, or left natural, can develop low limbs, co-dominant stems, defects such as included bark, and accumulation of dead branches.

Remember, when pruning Oak trees you must paint your cuts, this includes all wounds any size, at anytime during the year!  This rule applies for all species of Oak and to wounds made, for example, from a weed eater or lawn mower.  Any latex based paint works well, the color doesn’t matter.

The objectives for pruning young trees are to:

First Pruning – Pruning at Planting: Trees that are less than four inches in diameter do not have any permanent branches.  It will take many years for the permanent branches to develop.  Shorten or remove all branches competing with the one leader that will make the best main stem.  Remove broken, cracked, damaged or dead branches.  Do not remove more than twenty-five percent of the live foliage at planting.

Second Pruning – Two Years After Planting: At this point, there still may not be any permanent branches, especially on trees less than four inches in diameter.  In order to establish a dominant leader, shorten or remove all competing leaders and branches four inches in diameter or larger within twelve inches of the largest diameter branches in the top half of the tree.  Shorten, or reduce, low, vigorous branches to improve clearances.

Third Pruning – Four Years After Planting: Most branches are temporary even four years after planting and will eventually be removed from the tree.  Shorten or remove any leaders competing with the dominant leader you have selected.  Reduce or remove low vigorous branches for clearances.  Continue to space upper canopy branches about twelve inches apart and reduce or remove branches in between.  There should be only one large branch per node.  If limbs are clustered, or have more than one branch per node, select the one branch that will remain and shorten or remove the competing branches.  Do not remove more than thirty-five percent of the live foliage.

Fourth Pruning: Eight Years After Planting: Shorten or remove any leaders competing with the dominant leader you have selected.  Select the lowest permanent branch and shorten any branches below this limb to reduce their growth.  Branches below the lowest permanent branch should be removed when they are about half the size of the trunk and after the bark in that area of the trunk has become thick and grooved, or once a branch bark ridge has been established.  Continue to space upper canopy branches at twelve to eighteen inches apart and reduce branches in-between.  The goal is to have only one branch per node, no clustered branches.  Do not remove more than twenty-five percent of the live foliage.

Sixth Pruning – Twenty Years: Shorten or remove leaders competing with the dominant leader.  Continue to identify permanent scaffold limbs and shorten branches that are between these branches, remember the goal is to have one branch per node.  Reduce or remove branches below the first permanent scaffold branch.

These seven pruning sessions accomplished within the first twenty-five years after planting will aid trees in developing good structure, enabling them to cope with high winds and most other stresses. Proper planting and good irrigation until the tree is established may allow you to prune less frequently.

Mature trees are usually pruned to reduce risk of failure and to provide clearances from structures and through-ways.  Occasionally mature trees need to be pruned to allow more light to the ground and for the health of the tree.  Ball moss removal is not pruning and should not include the removal of live branches.  The different types of pruning for mature trees can be performed in the entire tree or in sections of the tree depending on what needs to be accomplished.

Structural Pruning: Structural pruning either continues young tree pruning or initiates pruning to develop one dominant leader.  Trees with one dominant leader and small, well spaced branches are less likely to suffer mechanical failure, and can more effectively compartmentalize the spread of decay within the tree. Structural pruning selectively favors a single, dominant leader by suppressing competing leaders using reduction cuts.  Reduction cuts shorten stems back to lateral branches at least one-third the diameter of the cut stems.  Reduction cuts may need to be done every few years to encourage more growth in the selected leader, and should be performed on tree species that will become large at maturity to: promote longevity, decrease future maintenance costs, and in order to reduce conditions in the tree that could cause harm to people or property.

Thinning: Thinning reduces the density of live branches, increases light penetration to the interior of the canopy and to the ground below the tree, and increases air movement through the canopy for disease control.  Thinning is also performed for safety reasons.  For example, if performed properly, it can reduce the wind-sail effect or aid in weight reduction pruning.  Proper thinning retains the shape of the canopy and does not remove interior living branches.  Removing interior foliage, or lions-tailing, has adverse effects on a tree and should be avoided.

Thinning should result in an even distribution of branches by removing some of the branches from the edge of the canopy, not from the interior.  This type of pruning should not remove more than about fifteen to twenty percent of live foliage in a mature tree and often five to ten percent is enough.  For young trees, up to twenty-five percent live foliage can be removed without harm.  Thinning is a delicate process that removes small diameter limbs, usually in the one to two inch size.  Once completed, it may be difficult to tell that the tree was pruned and it should have most of its live interior growth.

Reduction Pruning: In the urban setting, trees often grow larger than the space they can occupy.  Reduction pruning is often used to reduce the size of a tree by decreasing the length of one or more branches.  It is also used for clearances and to reduce risk when a limb has become hazardous.  Reduction pruning reduces size while attempting to maintain a tree’s form.

When performing reduction cuts, limbs are cut back to their point of origin or back to a lateral branch that is large enough to sustain the limb and to assume apical dominance.  A common rule of thumb is the lateral branch should be at least one third the size of the removed portion; we normally like to select lateral branches at least half the size of the removed branch.  Most of the removed branches will be two to six inches in diameter.  Never reduce a landscape tree by topping it!  Topping causes a number of problems such as: decay, numerous sprouts, cracks in limbs, root decline, and bark defects, just to name a few!

Raising or Lifting the Canopy: Low branches are usually not desirable on mature trees in the urban setting.  Low branches can be kept small using reduction cuts until they are removed.  Upright growth from these low, undesirable branches needs to be removed.

Canopy raising, or lifting, is performed on young and middle aged trees to prevent low, non permanent branches from growing to a large diameter.  These branches are valuable to the tree because they help increase overall growth and they improve trunk taper, which increases trunk strength.  Branches below the lowest permanent branch should be removed when they are about half the size of the trunk and after the bark in that area of the trunk has become thick and grooved, or once a branch bark ridge has been established. Regular reduction cuts suppress limb growth while the branch bark ridge forms, until they are later removed.  This simple technique is less damaging for the tree because it prevents having to remove large limbs at the main stem.

Crown or Canopy Cleaning: Crown Cleaning includes the removal of dead, diseased, detached, and damaged branches. Crown cleaning is normally performed on middle aged or mature trees for the safety of people and property and to make the tree more attractive.  Crown cleaning can also be used to shorten branches with included bark to reduce the risk of failure and to address limbs with cracks or other structural defects.  A few water sprouts, or “suckers” can be removed but most of the sprouts should remain, removal of all internal sprouts can be very damaging to a mature tree.

Palms and cycads need regular pruning to keep them attractive and safe.  Many palms maintain a set number of live fronds.  For palms, a regular turnover of foliage occurs as dying lower fronds are replaced by new ones.  Dead fronds are not harmful to the Palm tree but they are a safety hazard, can provide shelter for all kinds of unwanted pests, and can become a fire hazard.  An excessive amount of older yellow fronds could indicate a nutrient deficiency of either: potassium, magnesium, or manganese.  Determine the cause of the problem because pruning or fertilizing with high nitrogen or the wrong type of fertilizer will only worsen this problem.

Before pruning palms, determine the reason you are pruning and the objective you want to accomplish.  Remove dead and dying fronds and developing flowers and fruit.  It is better not to remove live, healthy fronds, however, if you must remove healthy fronds, avoid removing fronds that are growing upward and be careful about removing fronds growing horizontally.  Excessive live frond removal can permanently reduce the set number of fronds a palm maintains.  When removing a frond, sever the frond close to the petiole base.

There is little reason to shave or strip the trunk smooth, although it does no harm to the palm.  The pineapple shape crafted at the base of date palms is not necessary for good health.
Illustrations, PowerPoints or photos by Edward F. Gilman, Professor, Environmental Horticulture Department, IFAS, University of Florida.